After a busy weekend of action at Barratts in Northampton, the final players who have earned places on next season’s EPSB Under-21 Premier Development Tour have been discovered. Congratulations go to:

Results from throughout the weekend can be viewed on snookerscores.net here and here.

For those that took part in the playoffs but did not qualify, there was an Order of Merit rankings list for every frame they won throughout the weekend.

Similar to the World Snooker Tour Q School top-up list, if any Under-21 Premier Development Tour events in the 2022/23 season do not reach their full 32-player capacity, places will be offered to those on the Junior Playoffs Order of Merit, working from top downwards dependent on number of spaces available and acceptance.

These ‘top-up’ players can earn the same prize money and ranking points that are available, and are eligible for opportunities such as international selection should they finish high enough in the overall rankings. They will also be permitted to play on the Under-20 Regional Development Tour (if age-eligible) during the same season.

Should there be any such availability, ‘top-up’ players will be contacted and invited.

The 2021/22 Junior Playoffs Order of Merit Rankings List is:

* Riley Ellis finishes above Mason Wilson due to making a higher break during the weekend. 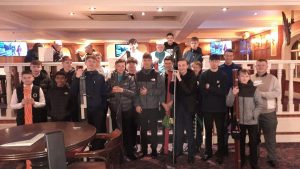