Following the opening phase qualifiers that featured events played at several venues up and down the country which involved 117 participants, the second phase saw the 27 remaining cueists compete in the northern and southern area finals. The Hazel Grove Snooker Club in Stockport and the Woking Snooker Centre were the respective hosts and it was the rapidly improving 13-year-olds who emerged. 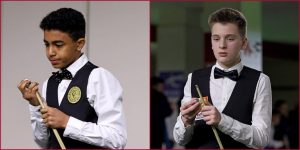 Southampton-based star Scott was in very fine form as he claimed this season’s southern area championship title with the loss of only two frames throughout the day.

‘King of Long Pot’ Scott won all four of his matches to top the group and qualify for the knockout phase. As well as an effort of 74, he made a 90 break – his highest in competitive play.

Scott dropped his first frame of the day and was taken to a decider by Asten Sahota in the last eight before coming through 2-1. In the semi-finals he needed the third frame again as he ousted Owen Jenkins by the same scoreline. 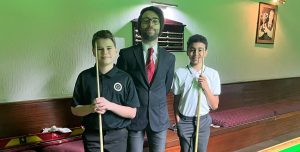 His opponent in the final was Harry Wyatt, whose only defeat of the day was to Scott during the groups phase. Apart from that loss, Wyatt had dropped just one other frame in Woking – during a 2-1 victory over William Thomson in the last four.

However, Scott was not to be denied the biggest title of his career so far, as a 34 break helped him take the opening frame of the final before he wrapped the tie up with the second.

Gradinari continues to make a name for himself as he relinquished just one frame on his way to winning the northern area title.

Born in Moldova but now based in this country as he attempts to make this sport his profession, Gradinari registered runs of 40, 32 and 42 as he – like Scott – won all four group games 2-0 and comfortably qualified for the last eight.

The best was yet to come, though. Also, like Scott, Gradinari recorded a piece of personal history during his 2-0 quarter-final success over Kaylan Patel. In an opening frame where both players made 30 plus breaks, Gradinari pipped it by one point before constructing an effort of 111 in frame two to advance.

The break – which is currently the championship’s highest this season – is Gradinari’s best in competition. Notably, it came within a week of his maiden century, a run of exactly 100 during an EPSB Open Series event that took place at Cueball Derby the Sunday before.

Gradinari’s toughest match of the day would come against Edward Jones, who has gained experience from competing on this season’s Under-21 Premier Development Tour as a top-up player. Jones made a break of 60 as he claimed frame two to level the scores, but Gradinari responded with a 41 which aided him to victory in the decider. 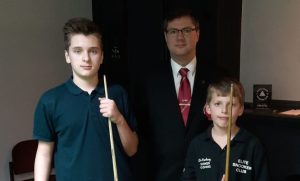 Promising 10-year-old Jack Wilding – who is under the guidance of former professional Chris Norbury at the Elite Snooker Club in Preston – would be Gradinari’s opponent in the final.

Despite facing rivals older than him, Wilding – a semi-finalist in this season’s English Under-16 Northern Area Championship – had won all five of his matches, dropping just a frame en route. In the group phase he chalked up breaks of 56 and 38, and defeated Jamie Hogg 2-0 in the last four to reach the final.

Gradinari’s experience likely proved to be the deciding factor in the title match, though, as he ran out a 2-0 victor.

In what is set to be an intriguing national final, the best-of-nine frames encounter between Scott and Gradinari is scheduled to take place during this season’s EPSB Finals Weekend (11th & 12th June) at the Northern Snooker Centre in Leeds.

Former winners of the English Under-14 Snooker Championship include current main tour professionals Ben Woollaston, Sam Craigie, Oliver Lines and Louis Heathcote. The last two editions of the event were both won by Stan Moody.

PowerGlide Cues are the proud sponsors of this year’s championship. The English Partnership for Snooker and Billiards would like to thank PowerGlide for their support of this event and their enthusiasm for junior snooker in general.