Cue & A with English Under-21 Champion Mark Lloyd

Home » Cue & A with English Under-21 Champion Mark Lloyd

Mark Lloyd has been a bright star on the national junior snooker circuit in recent years. The Gosport cueist is the current English under-21 champion and earlier this season after a very consistent campaign finished top of the EPSB Under-21 Premier Development Tour rankings.

We caught up with Mark to discuss his career to date, how he has coped with lockdown and his hopes for the future…

Hi Mark! Thanks for taking time out to talk to us here at the EPSB. How did you first come across snooker and are there any people/players that you looked up to?

I first got into snooker when my cousin introduced me to the game. I used to have a 6-foot table in the front room where he showed me the basics such as learning how to hold the cue, and I stuck with the game ever since.

I grew up watching players like Ronnie O’Sullivan and John Higgins, learning how to play the game and the different game styles they employed to win their matches.

Besides the last few months – for obvious reasons – where do you normally practice? Do you have any regular practice partners and, or coaches?

Usually I practice at a local snooker club in my hometown of Gosport. I’ve played there ever since I first started the game, although I do also occasionally play at another snooker club 20 minutes or so away from me.

I have one main practice partner (Pascal Richard) – when we can, we play 3-5 times a week. Sometimes I play a couple of others, but no-one as regularly as him.

I’m self-taught and haven’t got a coach. However, if I’m unable to notice what I’m doing wrong at certain times, then I always ask Pascal what the problem is – he’s a qualified coach and can spot the problem when something isn’t quite right. I’m grateful to have a practice partner like him.

You have won several regional and national accolades in recent years as well as representing your country. What would you say is your career highlight to date, and why?

I’m pleased to have the won the titles I have considering my practice facilities aren’t to the standard of other players, but that’s proof if you put the correct effort in, you get rewards as a result.

My main highlight is probably winning my first national title (English under-16s) as it gave me the confidence to push on and try to win more titles. That win acted as a ‘stepping stone’ – it gave me the belief to push on from there. I’m now looking to continue forward, hopefully earning myself a main tour spot. 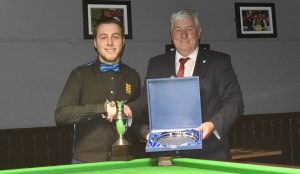 You finished top of this season’s Under-21 PDT rankings and are still in with a chance of defending the national championship too. How do you feel this season has gone for you so far?

This season hasn’t been too bad I would say. I used the Premier Tour as preparation for Q-School, looking to enjoy the events whilst trying to win them. Even though I didn’t play my best throughout the season, I still managed to win the rankings. Sometimes it’s good to win ugly, and that was the case this time on the tour.

Hopefully I’m able to win the under-21 championship again – we’ll have to wait and see how the results go. I’m looking forward to getting back into different competitions again, especially after this lockdown period.

As the English under-21 champion, you were selected to play at the professional English Open in Crawley last autumn as a wildcard. What was that experience like?

The English Open was an amazing experience. Weirdly enough, I actually felt at home there. I really enjoyed my time in that event, despite losing first round to Joe Perry.

Walking out in front of a crowd that size was brilliant. Now I’ve tasted it, it’s given me the ‘want’ to get back competing in future professional events.

How have you managed over the last couple of months with lockdown? Do you have many other hobbies?

The lockdown has been fairly boring if I’m honest! I’ve been trying to find various things to do to keep myself occupied – playing darts more than anything else – so maybe I’ll have to enter both snooker and darts Q-Schools!

Now I’m waiting to get back to the practice table in preparation for upcoming tournaments.

In action at the 2020 World Snooker Federation Open in Malta

Your girlfriend Chloe White plays on the World Women’s Snooker Tour (world number 21). When you’re able to, do you practice with one another and give each other advice?

Sometimes we practice with one another when we’re both available. If Chloe has an event around the corner we work on sharpening her game up. Hopefully she manages to push on, getting further in competitions and up the women’s world rankings.

The World Snooker Tour recently stated that they are trying to arrange Q-School for the start of August. Is that something you’re in a position to enter this season?

I’m absolutely buzzing for Q-School. I was gutted about the interruption to the season, but there’s nothing that can be done to change that.

When the clubs are able to open again, I’ll be back on the practice table preparing. I’m really looking forward to competing in it.

What are your snooker ambitions for the future?

My ambition is to be the best I can. Hopefully this leads to the professional circuit and I’ll be working hard to reach this level. I’m a believer in the adage ‘what you put in, you’ll get out”, so hopefully this will be the case for my snooker – I’ll be putting in the hours and hopefully the results will follow.

I’m not one for settling with what I’ve already won. I always want to win more, so hopefully I’m able to push on from here and get to the position of becoming a professional.