In addition to Jamie Curtis-Barrett’s triumph in the 101st English Amateur Snooker Championship, several other national titles were claimed during the 2021/22 English Partnership for Snooker and Billiards Finals Weekend at the Northern Snooker Centre in Leeds. 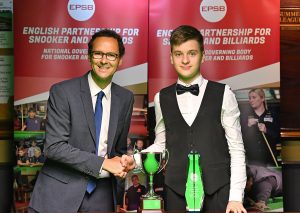 The first champion crowned was in the youngest age category as Vladislav Gradinari defeated fellow 13-year-old O’Shay Scott 5-0 in the final to win the PowerGlide Cues English Under-14 Snooker Championship.

Starting earlier this season, with over 100 entrants taking part in club qualifiers up and down the country, Gradinari – who has based himself at the Northern venue – was the last youngster standing as he wrapped up victory with breaks of 30 and 40 in the final two frames. This title follows Gradinari’s run to the final of the European under-16 championship in Albania last month.

Another promising cueist continuing to make waves is 15-year-old Stan Moody who defeated Aidan Murphy 7-0 in the final to lift the under-18 championship trophy. 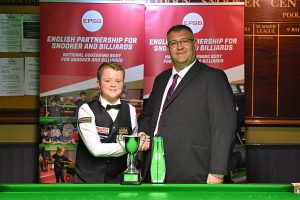 The scoreline did not reflect the true story of the match with several frames decided on the final black ball, but it was Moody – a back-to-back winner of the national under-14 title in the past – who came out on the correct side of those fine lines to add another accolade to his collection.

The Halifax star will have the chance to complete a double next month at the same venue when he faces Westley Cooper in the delayed under-16 final.

Callum Beresford dealt with some unfinished business as he got the better of Oliver Sykes 8-2 to win the under-21 championship. 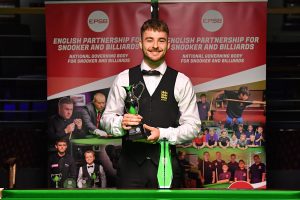 Three years ago, Beresford suffered heartbreak when he lost the final having been two up with three to play, but the Newcastle University student set that record straight as he established a 6-0 lead before later converting for success.

Whilst Sykes may initially feel disappointed, the consistent 16-year-old has several further opportunities to land the title as he continues to gain valuable experience having also reached the under-16 and 18 championship finals last year. 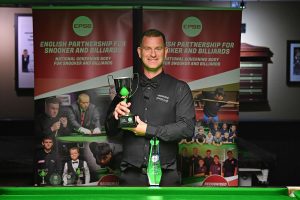 The margin of victory was not reflective of the flow of the match, though, with three of the opening five frames going down to the black ball (including a re-spotted black) which all went the way of former world number 42 Norman as he established a 5-0 lead.

Bodle – the 100th anniversary English amateur championship winner – avoided the whitewash with the help of a 67 break in frame six, but Norman confirmed the title with the next. 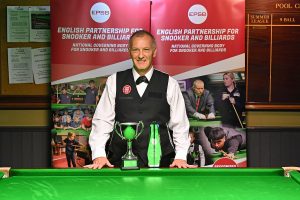 John Welsh warmed up for the English amateur final the following day by turning the tables and defeating Ashley Beal in a repeat of last year’s title decider to become England’s new over-55 champion.

Welsh registered runs of 30, 39, 51 and 49 as he restricted his opponent and established a 4-0 advantage going into the mid-session interval. However, defending champion Beal refused to loosen his grip on the trophy as he crafted efforts of 51 and 54 to half his arrears and threatened to produce a big turnaround.

In a close seventh frame, though, Welsh potted a fantastic blue and got position on the pink to remove doubt and seal a 5-2 win for the championship. 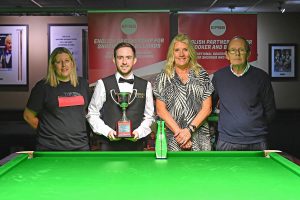 Named in honour of the former back-to-back champion who sadly passed away just over a year ago, O’ Sullivan – who since qualifying for this final has earned a place back on the professional circuit – scored a 70 break in consecutive frames on his way to a 6-1 first session lead.

On resumption, Phetmalaikul took the opening frame, but O’Sullivan claimed the next two for glory.

A close friend of Jake’s, and motivated to enter and win the tournament in tribute to him, O’Sullivan was presented the trophy by the Nicholson family who were in attendance for the match and awards ceremony. 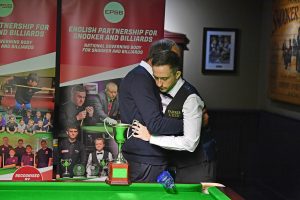 The EPSB would like to thank all the players, supporters and officials for their conduct at this weekend’s event and to those at the Northern Snooker Centre for once again being fantastic hosts. 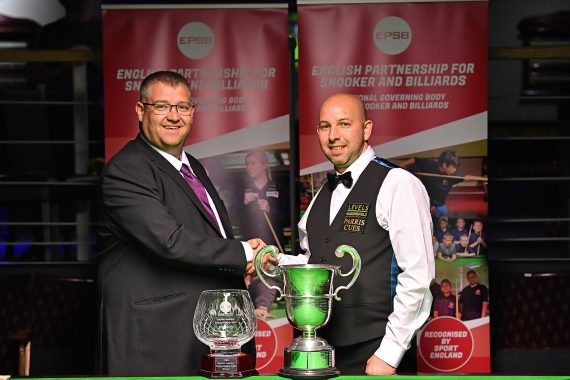