To The Crucible! EPSB Officials to Make Mark at World Seniors

Home » To The Crucible! EPSB Officials to Make Mark at World Seniors

A trio of English Partnership for Snooker and Billiards referees will officiate during the 2021 ROKiT World Seniors Snooker Championship at the Crucible Theatre later this week.

David Brown, James Chambers and Rod Eaton will all realise a dream and take charge of matches at the iconic venue for the first time in their careers.

The four-day event will be behind closed doors due to the ongoing coronavirus pandemic but will be watched live by thousands of fans across the world on various viewing platforms, including the BBC Red Button and website.

All three were selected by the World Seniors Snooker Tour for their hard work and dedication at the recent Seniors Q-School events in Reading and they are understandably excited at the prospect of being big components in this year’s championship which features several of the sport’s all-time greats. 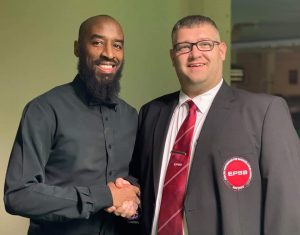 “The Home of Snooker”

Chambers is a familiar face to many on the EPSB circuit as a tournament director for several competitions, including the EPSB Amateur Tour. A referee at last year’s WST Q-School too, he has previously lived in Sheffield, currently works in the city and is the General Secretary for the snooker league there.

A qualified referee since 2002, Chambers is delighted to officiate in the hallowed arena: “It means the world to referee at the spiritual Home of Snooker.

As I am from Sheffield, I think a few friends and family would have come to the Crucible, but I know they will be watching on TV along with viewers all over the world. I looked at last year’s figures; 1.1 million logged onto the BBC website and 1.6 million watched on the Red Button, not to mention those watching in China, too.

No one can ever take away the fact that we’ll have refereed on the one-table set-up at the Crucible.”

Eaton will also feel at home as he too comes from the ‘Steel City’. Despite having played and officiated for several years at local league level, it has been a rapid few years for him and his white gloves as he only took the plunge to formally qualify in 2018.

Since then, he was also part of the team at the English Institute of Sport last summer for the Q-School and has recently tasted his first action on the sport’s professional circuit when he refereed at this season’s Welsh and Gibraltar Opens.

“Coming from Sheffield it is a dream to referee at the Home of Snooker and it means a great deal to me. I have mixed feelings of nerves and excitement. It is a shame that there will be no crowd in the venue but I am still thrilled and excited to be refereeing these legends of snooker.” said Eaton. 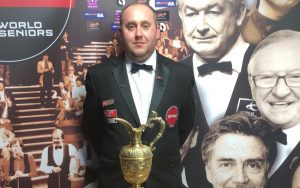 Brown is no stranger to officiating the sport’s biggest names having refereed several exhibitions with world champions in the north east.

He has six years of experience being in the middle with his journey beginning when he spoke to former world women’s champion Vera Selby who was an examiner at the time.

“It is every referee’s dream to officiate at the Crucible; I can’t explain how good it feels. It’s an honour and privilege to represent the World Seniors Snooker Tour and the EPSB.

I’m sure it will be a great week once again for snooker. We have a great team of officials who all get along which will make it even better.” said Brown.

All three will be under the wing of head tournament referee Leo Scullion who officiated the world professional championship final in 2019.

Everyone at the EPSB congratulates David, James and Rod, and wishes them well for the championship.

If you are interested in becoming a referee, please visit here.