Fantastic Fenton is the Latest U-21 Tour Event Winner

Home » Fantastic Fenton is the Latest U-21 Tour Event Winner

Following opening tour stops in Leeds and Derby, this latest leg of the circuit was hosted by the Crucible Sports and Social Club in Newbury where the nation’s top junior talents gathered.

Despite his later success, Fenton’s weekend started slowly. Although he made a century break (101), he won only one of his four group matches and finished bottom of his pool. However, he recovered in amazing fashion during the knockout phase the next day.

Fenton quickly found himself in trouble during his opening match against Liam Pullen where he turned a 2-0 deficit into a 3-2 win, he then survived another decider to eliminate Callum Beresford by the same result in the last 16 (61 break). Both Fenton and his quarter-final opponent Aidan Murphy produced half-centuries during their tie, with the former going through 3-1.

In the semi-finals Fenton cranked up the scoring again, crafting breaks of 127 – which would stand as the weekend’s highest – and 76, to dispatch under-21 national champion Mark Lloyd 3-1, after losing the first frame. 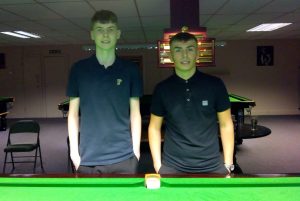 The final’s other component was Connor Benzey, who had been in superb form across the two days, remaining undefeated and having lost just five frames in a total of six matches. It was Fenton, though, who made the stronger start, going 2-0 up and one away from victory. Benzey got on the board as he chalked up a 68 break in frame three before also notching up frame four to force a decider. In a dramatic climax, the tournament concluded on the final black ball which Fenton managed to sink.

Benzey can be comforted by knowing that he will move to the top of the rankings with two more events to come this season. This campaign’s tour is proving to be very competitive with six different finalists so far.

During Saturday’s groups stage, Luke Pinches, Benzey, Jack Harris, Lloyd, Sean McAllister and Jenson Kendrick all won their pools and each earned the maximum 50 ranking points from that phase.

For full results from the tournament, please visit snookerscores.net here.

Fenton is pictured above with tournament director Graham Mason. Thank you to all the officials and the Crucible staff invovled with the event.