Revamped by the English Partnership for Snooker and Billiards, this national event began at the start of October with 12 club qualifying competitions being held up and down the country, in an attempt to make the tournament as accessible as possible. In total, 119 youngsters took part, a significant increase on last season’s equivalent staging which had 33 entries. The winners and runners-up of these club qualifiers advanced to the next phase of the championship, with additional wildcard places awarded to venues that had bigger entry numbers.

Stage Two featured two ‘area’ events for the overall 32 players left; 16 in the north and 16 in the south. Both events saw the hopefuls split into four round robin groups of four, competing over the best-of-three frames matches. The top two from each group would qualify for Stage Three later in the season.

On Saturday it was the turn of the north area event which was held by Levels in Huddersfield. Defending champion Stanley Moody, Ali Khan, Brandon Garside and Nathan Barton all won their pools after chalking up three victroies out of three – the latter two doing so without dropping a frame. Ethan Llewellyn, Westley Cooper, Jack Wise and Jamie Horseman finished as runners-up and also progressed. Garside, who won the Northern Snooker Centre qualifier, made the day’s highest break with a 59. 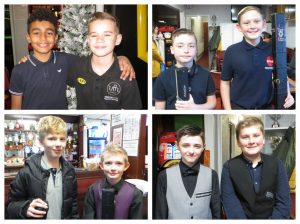 The 16 remaining players qualify for Stage Three’s national last 16 knockouts which will take place on Saturday May 9th 2020, where the tournament will be played up to the final. The English Under-14 Championship Final will be a part of the 2019/2020 EPSB Finals Weekend at the Northern Snooker Centre in Leeds on the 27th and 28th June, 2020.

The EPSB would like to thank everyone involved in the running of last weekend’s events. To view the full results, please visit snookerscores.net here.