A busy weekend consisting of four EPSB events were held across the country last weekend. In this latest edition of The EPSB Weekly we review the action from each and look at events elsewhere involving our members.

Daniel Womersley claimed Event Two of this season’s English Amateur Tour when he was victorious at the Crucible Sports and Social Club in Newbury on Sunday.

The Leeds-based potter emerged from a very strong field featuring former main tour professionals, top amateur names and young rising stars. He began his campaign on Saturday with a trio of knockout wins against Andy Marriot, Alex Davies and youngster Aidan Murphy, registering breaks of 94, 54, 120, 82 and 55 in the process.

Returning the next day, Womersley defeated Patrick Whelan 4-2 in the last eight and then produced efforts of 54 and 76 when narrowly getting past Ben Hancorn 4-3 in the semi-finals.

He faced recent top tier exponent Sean O’Sullivan in the final, who had made what would be the highest break of the weekend courtesy of a 141 during his first round success over Jason Tart. The Londoner squeezed through 4-3 against recent Challenge Tour maximum man Ashley Hugill in the quarters and dispatched promising Sean Maddocks 4-1 in the semis. 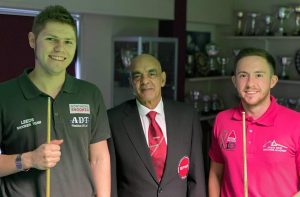 In what was a quality and close title decider, O’Sullivan opened his account with a break of 77, but Womersley struck back with a 68 in frame two. O’Sullivan went back in front, but a 93 from Womersley levelled it before he notched up frame five to move ahead for the first time and one away from the finish line. The match was forced to a decider by O’Sullivan, but Womersley expertly controlled the final frame to collect the accolade and top prize.

Elsewhere, event one winner Rory McLeod lost to Steven Hallworth in the first round. From the opening two events of the tour, there have been seven breaks of 120 or more, with each event boasting a top score of over 140.

Chae Ross and Stanley Moody were the latest winners on the Under-20 Regional Development Tour after exciting finishes in their respective tournaments.

Leicester cueist Ross qualified from his group, compiling breaks of 74, and a 73 where he was on 10 reds and 9 blacks before falling just shy and being unable to see the tenth black to pot it. He also made an 87 in the quarter-finals.

Hussain chalked up the opening frame of the final, but Ross squared the match with a fantastic run of 119 before clinching the decider on the final pink.

In the north area second event hosted by the Hazel Grove Snooker Club in Stockport, current English Under-14 champion Moody qualified for the knockouts after finishing second in his group. He then got the better of number 3 seed Jack Townsend 2-1 in the last eight.

Moody ended the hopes of Adam Williams 2-0 in just 35 minutes in the last four to set up a final with Luke Flanagan, who had earlier topped Group A and later denied event one winner Matthew Lawton in the other semi-final.

The opening two frames of the final were shared – with both players producing 30 plus breaks – before Moody sank the final pink and black in the decider to triumph.

The Northern Snooker Centre in Leeds held the latest stage one club qualifier in the revamped English Under-14 Championship last Saturday. Played as a straight knockout, Brandon Garside and James Pears (both pictured respectively at the top of the page) reached the final and therefore both qualified for the next phase later in the season.

In the subsequent final, Pears deposited the opening frame, but 12-year-old Garside levelled the tie up on the black, and then won the deciding frame for the title. Congratulations to both Brandon and James.

Oliver Hudson won the plate competition after defeating Oliver Naylor in the final.

Thank you to Paul Marlow who oversaw proceedings for the day.

English Under-21 Champion Lloyd was eliminated by Joe Perry, although he did take a frame off the top 16 star. Last season’s Under-21 Premier Tour champion Davies defeated Peifan Lei 4-2 in the first round before losing to a semi-finalist from this year’s World Championship, David Gilbert, in the last 64. Gilbert made breaks of 130, 88 and 136 in that match.

Everyone at the EPSB is proud of how both Mark and Ryan represented us at the tournament. 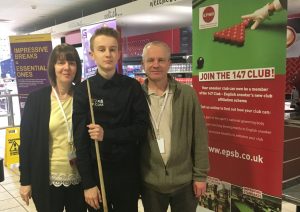 Kenna emerged from a strong entry at the General Snooker Club, featuring Reanne Evans, Ng On Yee and Nutcharut Wongharuthai. She defeated Chinese teenager Bai Yulu 4-1 in the final.

The Yorkshire-based cueist is scheduled to return to World Women’s Snooker Tour action in November when competing in the Eden Women’s Masters at Frames in Coulsdon.

It’s yet another busy weekend of play on the EPSB circuit. The opening stages of the first national championships of the campaign are on the menu, with the north and south qualifiers for the English Over-55 Championship happening on Saturday in Liverpool and Newbury respectively. The events at Scotties Snooker and the Crucible Sports and Social Club will each generate a winner, with both facing one another in the national final later in the season.

The English Under-16 Championship will get underway on Sunday at Chandlers Ford Snooker Club, as it hosts the south area qualifiers.

We will also see the latest club qualifier in the Under-14 Championship at the Mill Brow in Widnes. 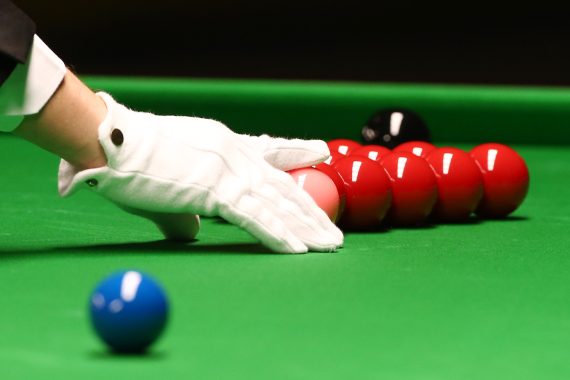