It has been a busy period on the English Partnership for Snooker and Billiards tournament circuit over the last few weeks with several events held up and down the country. Here is our latest round-up…

John Welsh and Ashley Beal will contest the English Over-55 Championship Final later in the season after they won their respective area qualifiers.

Welsh won the North Qualifying event at Scotties Snooker Club in Liverpool, dropping just one frame throughout the entire day. He topped his group following three wins from three before defeating James Simpson (2-0) in the semi-finals and 2018 champion Steve Whalley (2-0) in the final. Welsh produced many useful contributions although Andrew Pennington – who lost to Whalley in the last four – made the highest of the day with a 77.

Crucible Sports and Social Club in Newbury was the venue of the South Qualifying event where Beal came out on top. Beal initially headed a tough group containing recent ROKiT Super Seniors event winner Colin Mitchell and defending Over-55 champion John Rees. In the knockout phase he booked his ticket to the EPSB Finals Weekend at the Northern Snooker Centre in Leeds with victories over 2018 runner-up Bill Cornish (2-1) in the last four and then Richard Emery (2-0) in the final. Raj Puri, the other semi-finalist, crafted the high break of 57. 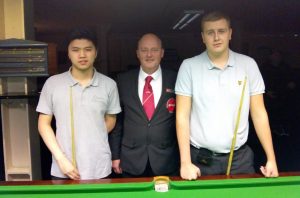 Kayden Brierley (pictured above, right) emerged from a quality field to triumph in the second Under-21 Premier Development Tour event of the season at the Cueball Derby.

Brierley was brilliant during the second day knockout portion of the competition; bouncing back from a disappointing group stage campaign.

The Manchester based cueist held his nerve to oust Jamie Wilson 3-2 in the last 32 before a more comfortable looking 3-0 elimination of Sam Dexter in the last 16. He went the distance again to deny current English Under-18 and 6-Red Champion Jenson Kendrick 3-2 during the quarter-finals, and then saw off two-time national championship finalist last season, Liam Pullen, 3-0 in the last four.

Brierley’s opponent in the final was Manasawin Phetmalaikul (pictured above, left) who came second in his group on Saturday before getting the better of event one winner Harry Gosney, current under-21 national champion Mark Lloyd, Luke Pinches and Hamim Hussain in the knockouts. In a predictably close final match, Brierley shaded it in a deciding frame 3-2 to claim the title.

Jack Haley is the champion of the first Under-20 Regional Development Tour South event of the 2019/2020 campaign.

Hosted by Newbury’s Crucible Sports, Haley made his intentions clear during the groups stage, winning all four of his fixtures to finish and qualify top from Group C. He then took it further by not dropping a single frame in the knockouts, defeating Oshay Scott (2-0) in the last eight, Ronnie Sullivan (2-0) in the last four and then Lee Whaley 2-0 in the event final.

Steven Hughes was pipped by Whaley in the other semi-final. Ryan Hughes, Adam Stacey and Aristos Pampouris had also qualified from the groups and were the other quarter-finalists.

Following area qualifying events in Chandlers Ford, Widnes and Northampton after the last few weeks, the last 16 lineup for this season’s Under-16 Championship has been settled. You can view a separate piece on the qualifiers’ journey so far, here.

More club qualifying events for the revamped Under-14 Championship have been held recently.

At the Mill Brow Snooker and Social Club in Widnes, Ethan Llewellyn and Sam Shone both qualified for stage two of the competition after reaching the final, where Ethan won the day’s event, 2-0. In the plate tournament, Jack Tollitt came through against Alex Jones in the final.

Edward Jones and Kaylan Patel will represent Breakers Snooker Club in Leicester (main picture at top) after advancing from their qualifier. Jones and Patel defeated Alfie Moore and Yashnai Parmar respectively in the semi-finals to make it through to stage two which will be held on the weekend of the 14th and 15th December.