A bumper schedule of junior snooker was the agenda last weekend as several EPSB events took place up and down the country.

The journey to under-18 and under-21 national championship glory began with regional qualifiers in Leeds, Leicester and Coulsdon.

The north qualifying event took place at the Northern Snooker Centre and saw Ryan Davies, Sean Maddocks, Liam Pullen, Lewis Harper, Jack Townsend and Lewis Ullah all advance to the national last 16 later in the season. Maddocks, who won the qualifier after defeating Pullen in the final, constructed a break of 105 in the quarter-finals. In the groups stage Davies made back-to-back centuries of 101 and 107 against last season’s under-14 national champion Stanley Moody.

At Club 147 in the Midlands, Halim Hussain, Aidan Murphy, Jake Crofts, Westley Cooper and Joe Woodhouse progressed. Hussain got the better of Murphy (both pictured above, Hussain – right, Murphy – left) in the final to win the event. Murphy posted the top run of the day with a 97.

In the south event at Frames in Coulsdon, the successful qualifiers were Connor Benzey, Oliver Sykes, Jack Haley, Ryan Hughes and Mickey Joyce. Benzey was the star performer, dropping just two frames throughout as he triumphed in the final, overcoming Sykes. He also headed the breaks chart with a 91.

The last 16 of the championship is scheduled for Saturday April 25th 2020. 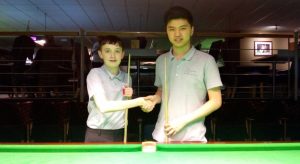 Manasawin Phetmalaikul, Liam Pullen, Brandon Hall, Ryan Davies, Sam Dexter and Sean Maddocks were the north event qualifiers for the last 16 stage of the Under-21 Championship. Phetmalaikul – who also top scored for the day with a 95 and relinquished just two frames overall – emerged as the day’s winner; Pullen was the runner-up.

Chae Ross, Jack Harris, Jed Mann, Halim Hussain and Jenson Kendrick all stamped their tickets for the last 16 as they came through in the Midlands. Ross finished as the event winner following victory over Harris in the final. Last season’s national under-18 and 6-Red champion Kendrick crafted the high break of 103.

Claiming berths in the last 16 from the south were event winner Jamie Wilson, finalist Lennard Cripps, Bradley Cowdroy, Jack Haley and defending under-21 champion Mark Lloyd. Luke Pinches, who narrowly missed out on qualification, is still in line for the overall high break prize after setting the benchmark with an effort of 108.

The last 16 of the championship is scheduled for Sunday April 26th 2020. 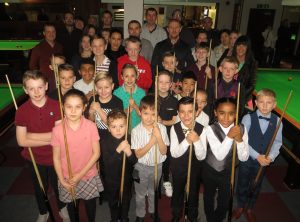 The latest club qualifiers in this season’s English Under-14 Championship took place last weekend with a variety of ages and genders participating.

Zoe Killington and Nathan Barton will both represent Liverpool’s Scotties Snooker in stage two next month after reaching the final of their qualifier where 14 players featured.

At Chandlers Ford Snooker Club (pictured above) a group of 20 hopefuls from four counties played, that saw an entry as young as five-years-old. O’Shay Scott defeated 10-year-old Thomas Devine in the final, although both are guaranteed to qualify for the next phase in December. Harry Wyatt denied Chris Bennett in the final of the plate event.

We would like to thank everyone involved with last weekend’s events.

Coming Up This Weekend…

There is another busy weekend of EPSB action ahead with no less than six events taking place.

The second Seniors Tour event of the campaign will be hosted by the Pot Black Clacton, whilst the third events of the Under-20 Regional Development Tour in the Midlands (The Winchester, Leicester) and North (Elite Snooker, Preston) will also be played.

In the Under-14 Championship, a trio of club qualifiers will be held at Castle Snooker Club (Brighton), Elite Snooker and Waterlooville Sports Club.

Players have until the end of this week (up to and including Sunday 17th November) to enter English Amateur Tour Event Three being held at the Northern Snooker Centre in Leeds on the 23rd and 24th of November and Under-20 Regional Development Tour South Event Two at Chandlers Ford on the 24th November.

Time is also running out to enter the historic 100th English Amateur Championship, with the five regional qualifiers (four qualifiers will come from each) breaking the competition off on December 1st. Players have up to and including the 24th November to enter.

To enter any EPSB event this season, please use the EPSB MemberZone here to book your place.