The Seniors Tour, Under-20 Regional Development Tour and further club qualifiers in the Under-14 Championship were on the EPSB’s tournament schedule last weekend.

Townsend began his Essex excursion by topping his round robin group on Saturday after winning all four of his matches. Shaun Wilkes, Wayne Brown and David Brown also won their groups, and along with Townsend, all gain additional ranking points for doing so.

In the knockout portion of the event, Townsend eliminated Sean Ward, David Brown and then Aidan Owens before denying Mark Ball 3-1 in the final. Ball had ousted Graham Beardsmore in the semi-finals.

Semi-finalist Owens constructed the highest break of the weekend with a 131. Wayne Brown made a brace of centuries (114, 101) and Townsend also chalked up a 103.

Chae Ross and Riley Fisher won the latest Under-20 Regional Development Tour events in the Midlands and North regions respectively; the third events in those areas this season, so far.

Ross made it back-to-back victories on the tour at The Winchester in Leicester. He qualified top of his group with three wins from three before defeating event one winner Halim Hussain (2-0) in the semi-finals and recovering from the loss of the opening frame to overcome Ryan Roberts 2-1 in the final.

Fisher emerged from a busy day at the Elite Snooker Club in Preston. After finishing second and qualifying from a competitive group that featured event two winner Stanley Moody, Fisher got the better of Adam Williams (2-1), Jake Crofts (2-1) and then event one winner Matthew Lawton 2-0 in the final.

Samuel Lee Stevens made the highest break of the day with a 71.

For results from this weekend’s events, please visit snookerscores.net here. 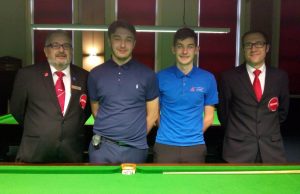 A further six young cueists guaranteed their spots in stage two of the English Under-14 Snooker Championship following the completion of another three club qualifying events last weekend.

On Saturday at the Castle Snooker Club in Brighton John Donavan defeated Dylan Smith, while at the Elite in Preston Stan Moody defeated Louie Barnes for their respective club titles. On Sunday at the Waterlooville Sports Club Owen Jenkins triumphed over Connor Wollen to do likewise. All finalists from these events qualify for next month’s second phase with hopes of the overall national championship title still alight.

Along with Lam, Rory McLeod and event two victor Jake Nicholson all reached the quarter-finals.

History will be made this season with the crowning of the 100th English Amateur Snooker Champion, and the final taking place at The Centaur, Cheltenham Racecourse during World Snooker’s World Grand Prix on Saturday February 8th, 2020.

The event begins with five regional heats on December 1st with four qualifiers emerging from each to contest the national last 20 stage which will be played in January.

Entry into the 100th edition of snooker’s longest running tournament closes at the end of this week. Don’t miss out! To enter, please visit the EPSB MemberZone here.